Having recently returned from a fabulous holiday in the US, visiting my son and daughter-in-law in their new home just north of Boston – and just about recovered from the trials and tribulations of the flight cancellations triggered by British Airways’ industrial action: see my language blog for the gruesome details – I’m still trying to catch up with the allotment and garden produce that accrues when you’re away for over a fortnight at this busy time of the gardening year!

This has clearly been an exceptional year for tomatoes and apples, leaving me with kilos of both to deal with. No wonder I’ve already made 32 individual portions of soup for the freezer (three different tomato varieties and broccoli and blue cheese soup using the calabrese heads that were nowhere to be seen before I left, yet threatening to flower by the time I arrived home!). The sweetcorn has virtually gone over, and, while I harvested a good number or reasonable-sized courgettes, I also left five monster marrows on the allotment sharing table along with green and purple French beans that were fatter than I usually like to eat them! The Marjorie plums were also ready, although sadly some of these are still infested by plum maggots, despite the plum moth trap that worked so well with my early plums; better than last year, certainly, so I’ll definitely try again next year with the greasebands and traps and hope to eradicate them next season.

The allotment flowers too were simply amazing . It had clearly been warm and dry in my absence, but most things were flourishing and blooming away in gay abandon. The sunflowers are still heading skywards, albeit with a bit of a lean, but my Heath-Robinsonesque supports had done their job and held them largely in position. Cue armfuls of flowers for the house, including some of those amazing sunflowers, along with dahlias, asters (now known as Callistephus – ugh!) and zinnias, which have to be my flower of the year. They were everywhere in New England too, especially the giant varieties which I already have on my must-grow list for next year… 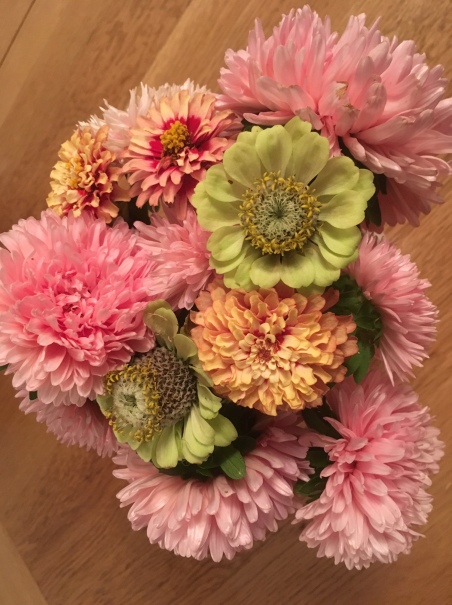 While I was frantically dealing with all my own produce, a friend brought round some autumn raspberries, which of course I couldn’t turn down, especially as mine are always pretty sparse. I do brilliantly with summer raspberries, but I suspect my autumn canes are planted in too much shade and don’t get enough water. No matter: my friend has the opposite problem so we are able to share our successes and compensate for the other’s relative failures.

Autumn raspberries have a richer, mellower taste than their sharper summer cousins and I always used to make them into a raspberry & cinnamon torte in the days when we lived in Scotland and had plenty of berries in the damper climate and peaty soil. For some reason this recipe had slipped out of my repertoire and I was only reminded of it a few months ago when reading a magazine in which a journalist described a very similar recipe and said he too had stopped using it – probably having done it to death, as I did! With this now at the forefront of my mind, I decided to revisit this old favourite and the scent of it cooking in the oven brought it all flooding back – how on earth could I have let this one lapse? I hope you’ll agree that it is a stunning late summer pudding/cake. I can’t remember where the original recipe came from, possibly Good Housekeeping magazine, but it’s very, very good.

Grease and base line a 20 cm springform cake tin with greaseproof paper.

Place the butter, sugar, ground almonds, self-raising flour, egg and cinnamon in a large bowl and beat well. Spread half the mix over the base of the cake tin, using a fork to flatten lightly. Sprinkle the raspberries on top, then dot over the remaining almond mixture to almost cover the fruit. I tend to do this with my fingers, then pat it down with a fork again.

Stand the tin on a baking sheet, then bake at 160°C fan (Gas 4) for about 50 mins – 1 hour, until just firm to the touch with a springy texture. Cover if it is browning too much but not yet done. Cool in the tin slightly, but try to serve warm if you can, dusted with icing sugar and served with crème fraîche, clotted cream or whipped cream. Ice cream would probably be pretty good too. Inhale the heavenly cooked raspberry and cinnamon aromas and tuck in – bliss!

If you haven’t got enough raspberries – and I’m aware that 250g raspberries is a lot if you have to buy them from a supermarket, where they always seem to come in miserly little punnets – I’ve made this with half raspberries, half sliced dessert apples before and that works well too, if slightly less luscious than the all-raspberry original. This is still good cold if you have any left over, or you can warm it in the microwave to recreate the just-cooked sensation. 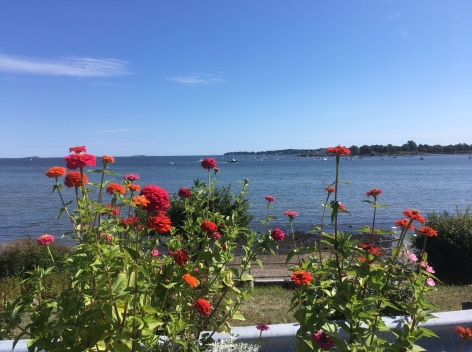