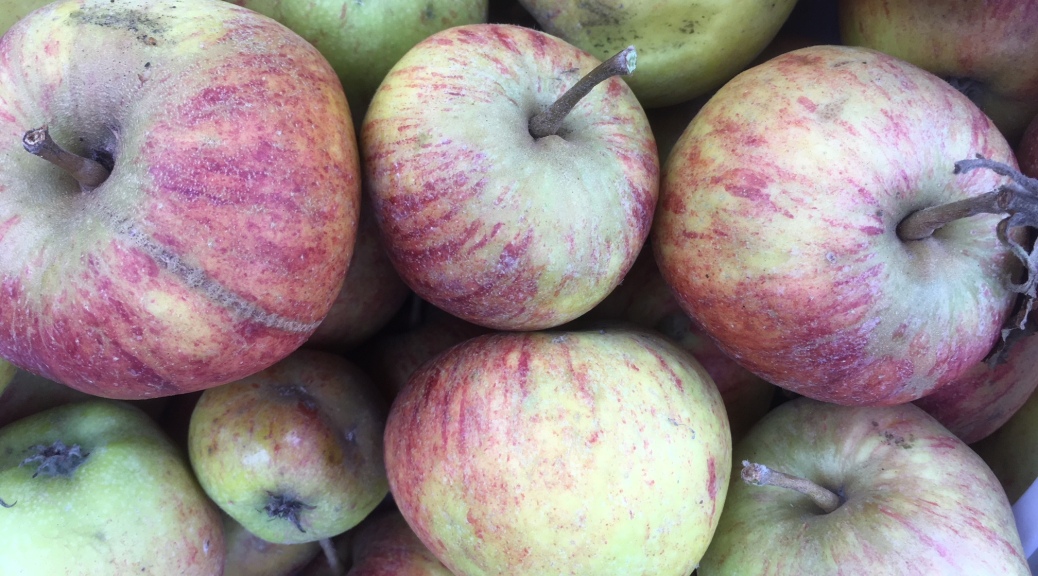 ‘Tis definitely apple season in all its joyous abundance – the ground beneath my orchard trees is covered with windfalls, some just slightly peck-marked, others victim to brown rot or insect damage from within. The plums were a martyr to moth damage earlier this year too, with a poor harvest in any case, but very few that were actually edible, as most had maggots in – yuk! Now’s the time to put greasebands round the trees to stop the moths sheltering overwinter – and next spring I’ll try and remember to hang pheromone traps to catch the other kinds of moths that cause so much damage to plums.

In the meantime, what to do with all these apples? The obligatory and delicious apple pies and crumbles, of course, plus apple juices and compotes for the freezer or to eat with my breakfast muesli. I like to use them in soup too, not only my favourite tomato, apple & celery, but with other strong-tasting vegetables to add an undernote of sweetness and some body. I’ve currently got an excellent crop of spinach and Swiss chard from both my spring and September sowings, so spinach soup was calling to me. I usually make spinach & pea soup with frozen peas, but had no peas in the freezer as I tend to use fresh veg through the summer months. Inspiration descended with the notion of combining spinach and apples in a soup, with a smattering of bulb fennel for good luck, since I’ve managed to grow it successfully for the first time – very good it was too! 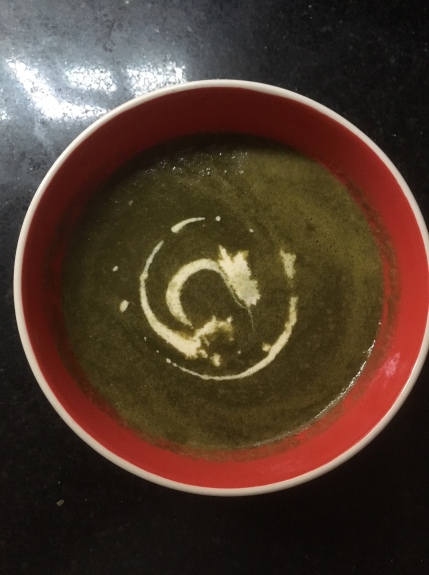 Melt the butter or olive oil in large pan and gently fry the diced onion, fennel, celery and garlic until soft and golden – about 10 minutes. Then add the diced apple, thyme leaves and bay leaf and stir for a couple of minutes. Add the chopped spinach leaves – it will look like a huge pile, but they soon wilt down. Finally, add the stock, a handful of red lentils (to thicken – leave out if you prefer) and seasoning, bring to the boil and cook for 20-25 minutes until nicely tender. Leave to cool, then blend in a liquidizer.

Serve with a swirl of cream or crème fraiche and homemade rolls straight from the oven.

Another revelation in the apple stakes was that apple juice with kale and fennel isn’t bitter at all, but rather delicious. Kale is another crop that just keeps on giving this year – strictly speaking, I grow cavolo nero for its beautiful dark green, crinkly leaves. It is so good for us, it’s a shame not to use it in as many ways as possible. I don’t get my juicer out as often as I should, but having experienced a sublime Green Goddess juice on my recent trip to the States, I thought I’d experiment. Cue 4 or 5 Cox-type apples, chopped kale (stalks removed), a quarter of a lime, a quarter of a fennel bulb and a knob of ginger. I say Cox-type as I sadly have no idea which variety mine is – it was in the allotment when I took it over, resembles a Cox (but without the scab problems that can afflict Cox apples proper), and is always extremely prolific, juicy and tasty. It stores quite well in the garage too. And the juice? – Divine! Do try it and see.

Another apple creation was inspired by a recipe I read in the Waitrose Kitchen magazine on my flight to Chicago. Conveniently, I knew I’d be able to track the recipe down online when I got home, but rather more impressively, I actually remembered to do so after a couple of weeks away! I’m always on the lookout for new ice cream recipes, so this one was extra-tempting: who could resist the prospect of toffee apple ice cream?! The original recipe used bought ice cream (the horror!), but I made my own and swirled it all together rather than layering – truly reminiscent of those brittle toffee apples of our childhood, but without the associated dental challenges! 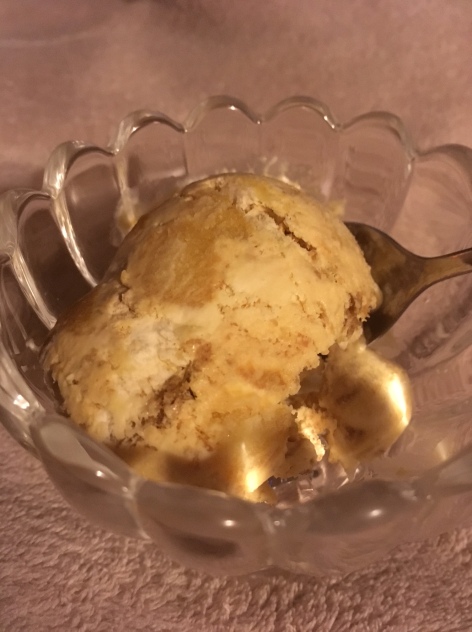 First, make the vanilla ice cream by placing 125g granulated sugar and 4 tbsp water in a small pan, allow the sugar to melt, then continue to cook over a gentle heat for 5 mins until syrupy. Allow to cool completely. Whip 600ml whipping cream with the cold syrup and vanilla extract until it thickens and just begins to hold its shape. Pour into an ice-cream maker (mine is a basic Magimix Glacier model where you have to freeze the bowl in the freezer overnight beforehand: simple but effective). It should take about 30-40 minutes to churn, and while that’s doing you can get on with the rest.

Preheat the oven to 150˚C, gas 3. Line a medium baking tray with baking parchment. For the crumble, put the brown sugar, flour and cinnamon in a bowl, then rub in 30g cubed butter and a pinch of salt, until the mixture resembles fine, gritty sand. Spread out on the tray and bake for 10 minutes, stirring halfway through, until pale golden and crisp. Set aside to cool.

Put the caster sugar in a large frying pan with 2 tbsp water. Heat gently, stirring until the sugar has dissolved. Then without stirring, bring to the boil over a medium-high heat and simmer briskly for about 4 minutes, until a dark golden caramel forms. If it colours unevenly, swirl the pan. Remove the pan from the heat; stir in the cream and a pinch more salt. Add the remaining 40g butter and stir until a smooth caramel forms. Pour into a heatproof bowl. Return the unwashed pan to the heat and add the diced apples (sprinkled with lemon juice to prevent browning). Cook, stirring, for 10 minutes, until softened and golden. Add to the caramel bowl and allow to cool.

If the ice cream is ready before the remaining ingredients are cool, just transfer it to a large freezer container and freeze until everything is cool. When you’re ready, gently fold in the crumble chunks and caramel apples until just mixed and return to the freezer to finish freezing. Remove from the freezer 20-30 minutes before serving – and enjoy!

My final offering today is hardly a recipe, more an assembly of garden produce that, combined, make a wonderfully refreshing autumn kale salad. It was inspired by a delicious cabbage and kale salad I had at one of my daughter-in-law’s friend’s houses in Ohio. She’d used a bagged salad from Costco (costing in excess of $5!), which even included raw Brussels sprouts (and I, a confirmed sprout hater, liked them – perhaps raw is the way to go!). I used vegetables from the allotment, with finely chopped raw kale, calabrese leaves, red lettuce, sliced fennel, toasted sunflower, pumpkin seeds and peanuts, dried cranberries, served with herb-roasted carrots, beetroot, red onion and potatoes, topped with a smattering of griddled halloumi (you could use feta or goat’s cheese too), and dressed with a lime, olive oil and pomegranate molasses dressing – so good! (And all the better for mostly being home-grown 😊).

This site uses Akismet to reduce spam. Learn how your comment data is processed.