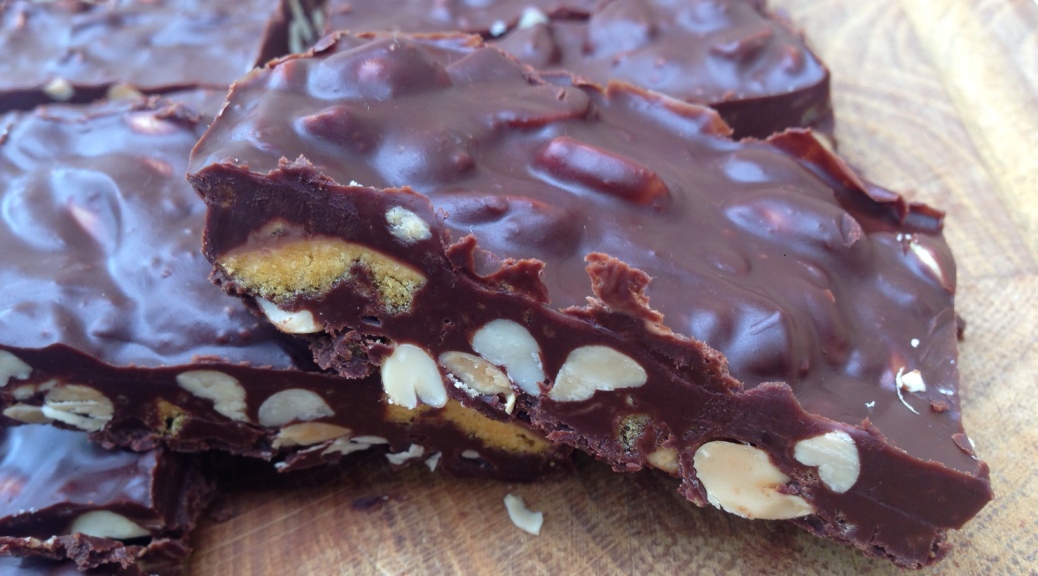 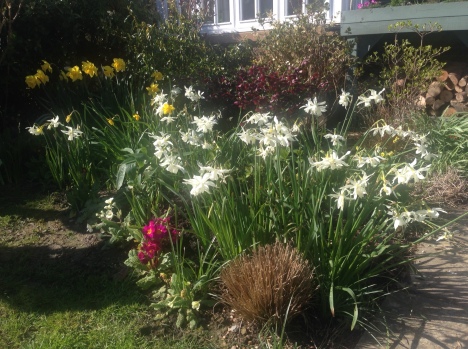 There are times when only chocolate hits the spot. Despite the sunny weather we’ve experienced this week, it’s still pretty cold here on the Kent/Sussex border. After a mild start to the year in which some of the early daffodils bloomed in January, my beautiful Thalia daffodils are still flowering away, yet the tulips are still for the most part in bud – apart from down at the allotment, where they’re flowering away in the middle of my asparagus bed, strangely! I can’t think it’s warmer at the allotment site, as it’s on an exposed (but sunny) hillside, but perhaps they’re planted less deeply than the bulbs at home. These are the bulbs emptied from last year’s tubs, so I’m delighted they’ve flowered again – but can’t bring myself to pick them as they look so pretty!

My seedlings, sown before my recent skiing holiday, are doing well in the conservatory, but the soil is far too cold to sow straight into the ground, so I’m going to have to hold fire this weekend and hope for warmer weather by the end of the month. Tomorrow’s tasks will include pricking out and potting on the seedlings – and hoping that the conservatory window ledges are big enough to hold the many resulting individual pots! My second-early potatoes can go into the ground, though, as they’re planted sufficiently deeply to avoid any lingering cold or frost.

The house is pleasantly heated by the warmth of the sun from the conservatory during the day, but I still have the heating set to come on morning and evening to take the chill off. Even so, comfort food is definitely the order of the day and that nip in the air means that only chocolate will do! This is one of my favourite indulgent recipes, from Nigella Lawson, and probably amazingly calorific, but absolutely delicious at the same time. Think Marathon bars (or Snickers, if you insist!), only ten times nicer, and you’ll get the picture. To be made once in a while, when you’re in need of a pick-me-up, salty yet sweet at the same time. Just make sure you have plenty of guests to share it with, as it’s far too tempting to sit in a tin and ration….

Line tin with foil.
Break chocolate into pieces and put in a saucepan with the butter and syrup.
Melt gently over a low heat, stirring as you go.
Tip the peanuts into a bowl and crush the Crunchie bars in their packets, then add the pieces to the bowl.
Take the melted chocolate off the heat and stir in the nuts and crushed Crunchie bars.
Mix together and tip into your lined tin, pressing down with a spatula.
Refrigerate for at least 4 hours, then cut into slices, either 24 skinny wedges if using a round tin, or 20-24 large rectangles if using a baking tray.
Enjoy!

My next indulgent recipe is a variation on a brownie that’s suitable for gluten-free visitors as it’s flourless – but definitely not for anyone looking to cut down on their sugar intake! Every now and again, though, you can surely bend the rules and treat yourself to these insanely good brownies? The recipe came from the Waitrose Kitchen magazine in the first place, along with a number of other scrumptious traybakes that I make again and again (see also Rocky Road Flapjack and Blackberry, Lime & Elderflower Drizzle Cake).

Set oven to 160°C fan/Gas 4 and grease a 30 x 20 x 5 cm baking tin, then line with baking parchment.
Melt the dark chocolate with the butter in a large pan over a low heat.
Stir in the vanilla extract and caster sugar, then mix in the 5 beaten eggs, ground almonds and baking powder.
Tip into the prepared tin, then swirl the contents of the can of Carnation Caramel over the top with a knife.
Bake for 40-45 minutes until set on top, but still moist inside.
Leave to cool in the tin before slicing into portions – at least 16!

Here’s hoping the weather picks up soon, so we can get digging to work off all those chocolatey calories…. 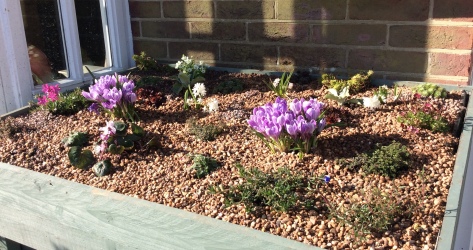 It’s at this time of year, after the clocks have gone forward, the sun finally shows its face and the soil gradually starts to warm up, that the rush is on to get everything going in the garden. It’s often a case of dodging the showers and making use of the limited time you have available to sow seeds here, prepare ground there and generally tick off all those spring jobs.

I sowed my first seeds two weeks ago, but most are now up and can be removed from the propagator to make room for the next batch: tomatoes (two old favourites, Sungold and Gardener’s Delight, and a new variety to me, Black Russian, a medium beefsteak heritage tomato, supposedly with an outstanding, rich flavour – we shall see!) and cucumber. I’m reverting back to Marketmore this year, a variety I used to grow with great success in my big greenhouse in Scotland, but I’m hoping it will like the conditions on the open allotment too, as I haven’t had a lot of success with other varieties I’ve tried outside to date.

Other jobs include planting up my new dahlias. I leave my existing dahlia tubers in the ground over the winter, well-mulched, and they seem to thrive, but as I’m cutting down on potatoes and adding another cutting flower bed at the allotment this year, it seemed an ideal opportunity to treat myself to a couple more! I ordered Café au Lait (from Crocus) plus Labyrinth and Wizard of Oz (from Sarah Raven), all in pastel shades that will extend my existing range of colours beautifully – and with half an eye to my son’s wedding next year, I must admit! These are started off in pots in my grow frame at home, then will go into the open ground when they are established and better able to cope with slug attacks. I’ve also started off my tuberous begonias, now huge tubers after two seasons’ worth of growing. I may have to ask friends for the loan of some space in their large glasshouse when I run out of room in the grow frame/conservatory windowsill for these monsters! 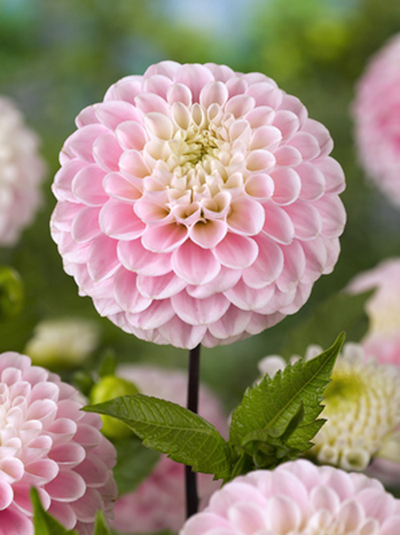 I also like to use fibrous-rooted begonias in my summer tubs as they don’t mind rain or shine and are also pretty slug-resistant. I buy the tiny plug plants from my local garden centre, sold in 24s for pricking out at home. In actual fact, each plug often contains two tiny plants and I invariably manage to get at least 60 plantlets once I’ve prised them apart. A very economical way of buying bedding plants, especially as these are notoriously tricky to grow from seed without specialist conditions.

Other jobs included dead-heading last year’s hydrangea flowers, another way of instantly tidying up the garden. These crispy flowerheads have done a great job of protecting the new foliage from late frosts, but we should be safe now to snip them off – although I once did this in late March when we lived in Scotland, only to have a very severe frost a couple of nights later, ending up with frosted new shoots and far fewer flowers than usual – you have been warned! 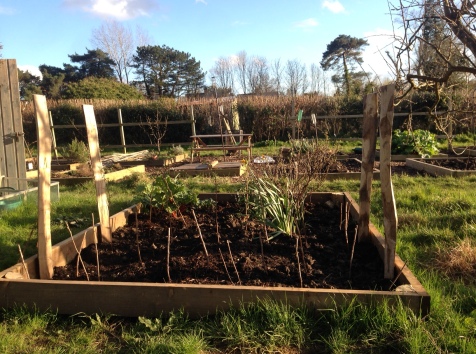 Down at the allotment, I finally managed to finish digging over my new raspberry bed and have planted up the new autumn canes, Polka, ordered from Thompson & Morgan. Having lost all my autumn raspberries last year due to some unknown virus, I thought I’d try a different variety: Polka is bred from the classic Autumn Bliss, but it supposed to have double the yield. I’ll report back in due course! I also dug up some summer raspberry suckers from where they are thriving underneath the Bramley apple tree and made a new row of summer fruit too – you can never have enough raspberries! I’ve finally found a taker for the top part of my allotment, so won’t have my original fruit bed any more – but I don’t think I’m going to go short any time soon….

All in all, a very satisfying weekend’s gardening.

After a meat-filled few days over Easter, with family and guests, I fancied something simple and vegetarian this weekend. There’s very little left on the allotment at this time of year (a few remaining leeks, parsnips, purple-sprouting broccoli and spinach), so I opted for an old favourite, based on spinach, originally from my friend Bridget up in Cheshire. This is so quick and easy, but delicious – life’s definitely NOT too short to stuff a mushroom!

Melt the butter in a frying pan and add the chopped onions and garlic. Cook until translucent, then add the chopped spinach and continue cooking for 5 mins or so until nicely wilted, then season to taste.

Divide the spinach and onion mixture between the flat mushrooms in a roasting tin and add 3-4 tbsp water to the base of the tin. Top each mushroom with a generous slice of Boursin (blue cheese or even goat’s cheese also work well). Cover the tin with foil.

Cook in a hot oven (180°C, Gas 5) for about 20 minutes, then remove the foil and cook for a further couple of minutes to brown the cheese slightly.

You can serve these with crusty bread to mop up the garlicky juices, but I like them just as they are – who needs meat with flavours as good as these?!